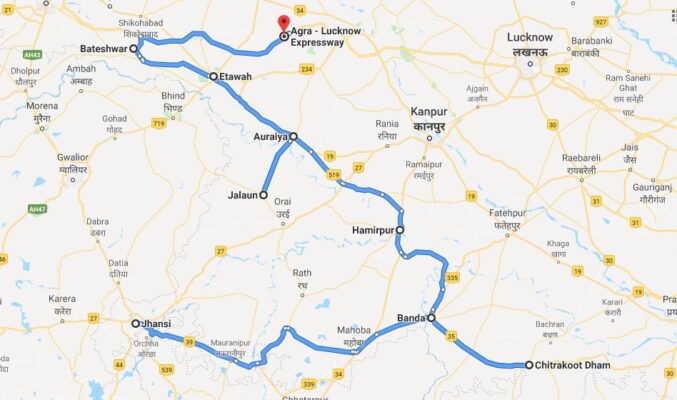 On February 29, 2020, prime minister Narendra Modi laid the foundation stone of the 296-km-long Bundelkhand Expressway, a four-lane controlled-access highway linking the backward regions in the state, to the national capital. It will pass through Uttar Pradesh’s Chitrakoot, Banda, Hamirpur and Jalaun districts and link the Bundelkhand region to Delhi through the Agra-Lucknow Expressway and the Yamuna Expressway.

As of March 2021, about 50% of the work has already been completed, helping the Uttar Pradesh Expressway Industrial Development Authority (UPEIDA) achieve a record of near-completion of a bridge over the Yamuna in a short span.

Some of the project construction works were impacted due to the second wave of COVID-19, causing delays. However, the government aims to complete the project before its deadline. The scheduled date for the completion of the project is March 2022. The main carriageway of the expressway is expected to be completed by the end of 2021.

How will the Bundelkhand Expressway benefit UP?

The project is being built at a cost of Rs 15,000 crores and is expected to change people’s lives in the entire region. Laying the foundation stone of the project, PM Modi said that the expressway would facilitate better connection between the region and facilities in bigger cities, as thousands of residents would be able to move smoothly for better job opportunities.

With the expressway backing its growth, Bundelkhand is also en route to becoming a big centre of the ‘Make In India’ project with goods manufactured herein being used for exports. In due course of time, smaller industries too are expected to thrive. Last year’s budget also had provisions for funds to the tune of Rs 3,700 crores that was allotted for the Uttar Pradesh Defence Corridor. The Expressway will be supplementing the nodes of the Uttar Pradesh Defence Industrial Corridor announced by the central government in February 2018.

The Expressway will reduce the travel time between New Delhi and Chitrakoot to six hours.

The expressway starts from Jhansi and passes through the state’s most backward districts like Chitrakoot, which is also a religious and tourist spot, Banda, Hamirpur, Auraiya and Jalaun. From Jalaun, it goes to Etawah and reaches Naseempur via Bateshwar in Agra, before joining the Agra-Lucknow Expressway.

See also: All about the Delhi-Meerut Expressway

Funding for the Bundelkhand Expressway project

In 2019, Bank of Baroda sanctioned a loan of Rs 2,000 crores for the ambitious the expressway.

With this initiative, other banks would also be able to fast-track the loan proposals under their consideration and the UPEIDA would be able to attain expeditious financial closure of the loan of Rs 7,000 crores for this project. The Industrial Corridor and the Defence Corridor proposed by the state government alongside the expressway, will further add to the industrial and economic activities in this area.

The Yogi Adityanath-led government first unveiled its plan about the upcoming expressway in April 2017, with an aim to improve the economy and connectivity in the interiors of Uttar Pradesh. The project started off in late 2019 with a vision to complete it over the next 30 months.

By 2019, 90% of the land needed for the project had already been acquired.

Use of technology in the construction of the expressway

Special technology is being used in the construction of the bridge. The UPEIDA chief engineer claims that the ribs have been created over thermoplastic linings on roadsides. This will alert the driver about his vehicle sliding off the road. This safety measure is entirely different from ones that were used in Agra and Poorvanchal.

How many expressways have been built in Uttar Pradesh recently?

The 340-km-long Purvanchal Expressway, the 296-km-long Bundelkhand Expressway and the 91-km-long Gorakhpur Link Expressway are under construction. By 2022, the state government is expecting the completion.

Which are the existing expressways in Uttar Pradesh?