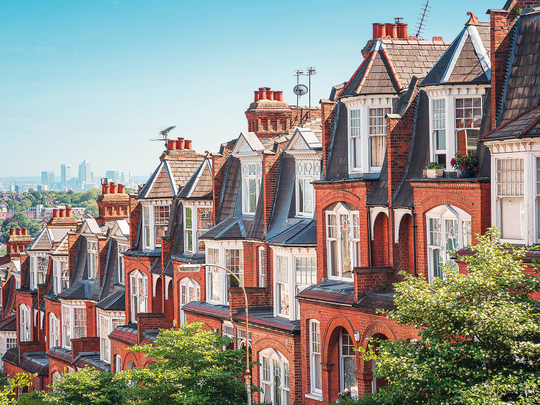 London: The UK property market is heating up rapidly, and a mix of surging demand and double-digit price growth is causing concern that an unsustainable bubble is building.

The pace of mortgage approvals is running more than a third higher than its pre-pandemic levels, and housing could be heading for its busiest year since before the financial crisis as buyers rush to take advantage of a tax cut. But with affordability stretched and lenders easing mortgage requirements, the signs are starting to worry some Bank of England policy makers.

The government’s tax holiday is only temporary, potentially creating a cliff edge and precipitating a slowdown toward the end of the year, just as job support programs end. BOE Deputy Governors Jon Cunliffe and Dave Ramsden both said this week that they’re watching the housing market “carefully” amid the boom conditions.

One risk is that banks relax lending restraints due to the wave of demand. Nationwide Building Society has started offering new mortgages that are 5.5 times the incomes of first-time buyers, above the 4.5 ratio commonly used. If others follow suit and tell regulators they need to adjust to the market, “we do start to see some danger,” said Neal Hudson, founder of Residential Analysts.

Still, demand could be propped up after the tax perk is phased out in the coming months as pandemic effects linger, particularly the work-from-home culture that’s fueled a desire for larger homes further outside urban areas.

The following charts break down what’s been happening in one of the most turbulent periods for the economy in modern history.

After more than a year of pandemic restrictions, residential property looks unscathed. Chancellor Rishi Sunak’s stamp-duty cut, which saved buyers as much as 15,000 pounds ($21,200), lit a fire under the market as other parts of the economy suffered.

The surge in demand can be seen in mortgage and transaction numbers, both of which reached multi-year highs. Despite criticism that the stimulus wasn’t needed, Sunak extended the perk to October 2021, past its original deadline of March.

In addition to the stamp duty effect, the pandemic also sparked a shift in lifestyle choices, and the desire for bigger properties is creating regional hotspots within the housing market.

That structural shift is happening on a global scale, with the U.K. one of 13 countries which saw double-digit house price growth over the past year, according to broker Knight Frank LLP.

That’s prompting authorities across the world to pull levers to put the brakes on rampant house price growth. Canada’s bank regulator has tightened mortgage lending requirements in light of its own housing boom, and New Zealand’s central bank is also threatening to act.

Back in the U.K., “there are quite a few people that are worried about what’s going on with house prices outside of London,” said Marcus Dixon, head of research at LonRes, a property data company. “We don’t mind a little bit of growth but we don’t want a crash.”

The latest figures from Nationwide Building Society put price growth close to 11%. While that may be skewed because of the slump in activity during the U.K.’s first lockdown a year earlier, values are still on a tear. Statistics office data puts average gains in the first quarter at 9%.

The mini-boom is an issue for those who were struggling to get on the property ladder even before the pandemic. With most lenders requiring a down payment of a fifth of the price, the average amount raised by new buyers to get a mortgage climbed by 23% in 2020, figures from Lloyds Banking Group show.

Affordability was already stretched, particularly in London. Critics of Sunak’s stamp duty cut say it added to the unequal fallout from the pandemic on younger workers, a point noted by Cunliffe.

The divergence between those who can and those who can’t afford to buy a home hits at the heart of the Conservative Party’s push to get more people on the housing ladder. The policy “- “Generation Buy” “- appeals to the quintessentially British dream of home ownership as a life milestone and the main way of accumulating wealth.

But while many people built up savings during the pandemic because they couldn’t go on holidays or eat out, it wasn’t the same for everyone. Young workers were disproportionately in industries most affected by lockdowns “- such as retail and restaurants “- leaving them out of pocket at a time when they might be trying to save for a deposit.

The government has since introduced a guarantee program for 95% loan-to-value mortgages. But other lending criteria mean it’s not always easy to get those loans. And for those who do, 5% doesn’t give buyers much of a margin above negative equity if home values fall.The program also stimulates demand without doing anything for supply, increasing the risks.

The risk of price declines is particularly pronounced in London, which has lagged behind other regions, and even within the city there’s been wide variance in demand.

Boroughs with some of the most expensive homes in the country have faced a reckoning as people fled the city center, while districts on the outskirts have been much sought after. But there are signs the wave of departures is starting to reverse, with demand ticking up in cities across the country amid a rapid vaccination rollout.

As the U.K. passes a succession of milestones in controlling the spread of Covid-19, threats to the economy linger. While the housing rally still has some distance to run, the unwinding of the stamp duty will occur around the same time that government job support ends. The latter could expose weakness in the labor market and push up unemployment.

“You’ve got these huge extremes in people’s experiences,” says Yolande Barnes, a real-estate researcher at UCL. “Now if you’ve got that in the economy you’ll get that in the housing market.”