All land-related records of citizens in Madhya Pradesh, are now maintained with the help of technology. The Bhulekh MP is a web portal launched by the Revenue Board of Madhya Pradesh, to maintain records. The Madhya Pradesh bhu naksha website, more commonly known as Madhya Pradesh Bhulekh, proves to be quite useful for those planning to buy a plot of land or property anywhere in the state. Through this portal, you can obtain the map of your property, application form, village list, crop details, classification report of land and geo map or bhu naksha.

Recently, in Satna district of Madhya Pradesh, the land mafia had occupied a large land parcel belonging to the government, estimated at Rs 5 crores. Various unauthorised constructions had already been built, while many others had been cultivating the land, not knowing the repercussions of the same. However, this is not the only incident and therefore, exercising precautions before its too late, is important. In this article, we are going to understand how to check the bhu naksha of your land on the website.

Why should you check details on MP bhu naksha portal?

Checking the plot details on bhu naksha portal is important for the following reasons:

Are you buying the property from the legal owner of the land? You can ascertain this through the MP bhu naksha portal.

Size of the land

Get the exact details of the land/plot through the MP bhu naksha portal. You can know the exact size, location and boundaries of the plot.

Not just in Madhya Pradesh, authorities across the country have taken initiatives to digitise the bhu naksha records. About 22 states have captured data while 19 already have sufficient bhu naksha data online, for easy use by the citizens and land owners. This will help many who may have otherwise decided to visit the government offices. With COVID-19 around, it is better to stay at home and find solutions to all land-related issues, online.

Step 3: You will be directed to a list of free services of which, one is the bhu naksha.

Step 4: Enter details of the land such as Zila, Tehsil and Village.

Step 5: Basis your selection, the bhu naksha will be displayed on your screen. You can enter khasra details for further clarity.

When your enter or select a particular khasra, all the details regarding its owner/s, size of the plot, nature of plot will be displayed. Step 2: You can either click on ‘naksha’ on top of the homepage or click on the city wherein the property is located, on the map. 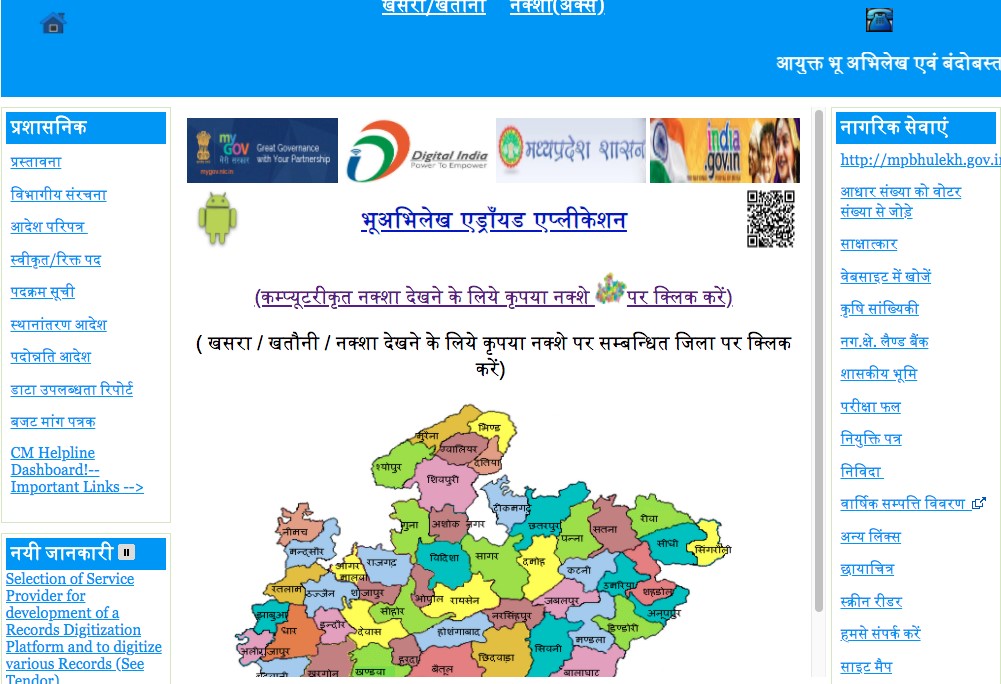 Step 3: When you choose any city, suppose Bhopal, the following message comes up:

Step 4: If you wish to proceed, click on the button provided as shown in the image above.

Step 5: Choose the tehsil and click OK to proceed.

Step 6: You can select the desired option from the drop down menu and type in the code to proceed. Choose Khasra/Naksha to proceed.

Step 7: You will be led to the Bhulekh website with the desired result.

Note that if it is a government land, you cannot see the ‘khatauni’. The khasra is as follows. Click on the ‘naksha’ to get the full view.

Bhu-naksha is available on mobile app

The Madhya Pradesh government has also started the Bhu naksha mobile app service for its citizens. You will also be able to easily access the Khasra, Khatauni details as well. All you need to do is download the MP Land Records- MP Bhu Abhilekh app.

Why should you use MP Bhulekh to check bhu naksha?

If you have ever frequented a government office, you will understand the time taken to get your work done. Now, checking land records and the bhu naksha is easy and can be done through your smartphone. This will also help end corruption and bribery that local offices are infamous for.

To obtain a copy of the map on an A4-sized paper, the charges are Rs 30 for the first page and Rs 15 for every additional page.

It was not mandatory to link the khasra number with the map number and hence, districts have not linked the two. For it to happen, web-based GIS applications must be linked to other departments, such as the revenue courts, bank and registration departments. In order to share the data with these departments, it is important that all the information should be up to date – that is, the khasra and bhu naksha should be up to date. This has now been made mandatory. All the previous changes that reflected in the khasra will need to reflect in the bhu naksha, as well. Map rectification module, Map number / attribute update, Map number exchange, Map number update and Map clipping / update modules, are now available to facilitate this.

Is it important for sellers/buyers in MP to check a bhu naksha?

The real estate sector was plagued by instances of fraud for a very long time, which made structural reforms like the Real Estate (Regulation and Development) Act (RERA) necessary. If you are a plot owner, a seller or a buyer, it becomes important to look for the relevant details of the property in question, on the MP bhu naksha. This helps to get rid of any confusion you may have, about the ownership or legality of the property.

Under the land ownership scheme, the state government is planning to conduct a geo-survey and ascertain the real owners of the land – those who have settled in Jabalpur for generations. Over 1,500 villages will be surveyed and the revenue department has already started preparations for the survey.

Obtain naksha in a day’s time

Starting August 6, 2020, you can get the khasra and naksha nakal in a day’s time. There had been complaints from the public that these were usually delayed for two to three days before anybody could get hold of these documents.

Various instances of land-grabbing by private land owners have come to the fore. The authorities have cracked down on numerous cases but across 1,000 police stations in Madhya Pradesh, over 150 cases still remain pending. Some are of the opinion that this number does not accurately show the extent of land grab in the state.

Instances of crimes by the bhu mafia became obvious even in the state’s capital, Bhopal. In a recent incident, an accused, Vijay Srivastava had started construction in violation of the authority’s decision. In place of a G+1 structure that he was permitted to build, Srivastava constructed a four-storey building and 12 shops on the lower two floors, on two EWS plots in Rishi East City located in Barkheda Pathani. The authority came down heavily on the bhu mafia across Bhopal in 2019 and has been taking action against big and small offenders. Srivastava’s illegal construction has been demolished.

How can I get in touch with Bhu Abhilekh authorities?

You can email your concerns to clrgwa@mp.nic.in

Do I need permission to download bhu naksha of my land in Bhopal?

No, the mobile application and the online website platform make it easy and simple for everyone to access and verify the bhu naksha of the land parcel they intend to buy or enquire about.

Can I download and print the MP bhu naksha?

Yes, bhu naksha can be downloaded and printed. You do not require any permission for this.