Mohsen Ahmad of Dubai’s Logistics District: ‘Ecommerce is all about constant motion and we’ll play our part’ 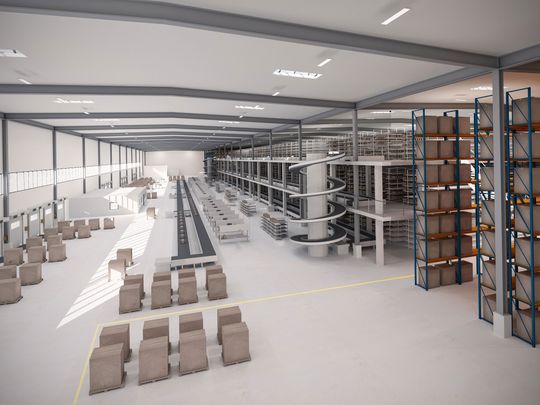 Dubai: The one thing that Mohsen Ahmad can’t stand is any loss of momentum. As CEO of the Logistics District at Dubai South, he has his reasons… and he doesn’t hold back when airing them.

“As long as cargo keeps moving, the business of logistics is quite simple, quite straight-forward,” said Ahmad. “But it’s when goods get stuck at the ports, warehouses or even at the gates, that it turns out to be a problem and in need of urgent action. No business can afford to have that. That’s where value gets destroyed in logistics. Downtime is bad for all.”

Speed is what Ahmad is working on – in creating ‘EZDubai’ as the biggest ecommerce focussed hub of operations in the Middle East and way beyond. The ecommerce zone was launched in early 2019 and since then, the team has been putting together all the pieces to make it deliver… at speed. COVID-19 didn’t end up disrupting that grand plan – in fact, what it did was convince everyone about having an optimum infrastructure to deliver all the benefits of ecommerce.

In double-quick time, as Ahmad says it. He sure can say that.

Since the pandemic, e-commerce penetration in the region has doubled, and is well on its way to reach $18.4 billion by 2024. The UAE is right up their keeping those numbers ticking along, as more shoppers and businesses go online in ordering what they want from wherever.

EZDubai and the rest of the logistics support network within Dubai South, which includes the mega airport, want to place right in the middle of this flow of goods from buyer to seller.

Get small businesses to speed

Ahmad’s vision scope is not confined to the big boys in the ecommerce game – the Amazons, the noons, or any of the Chinese online giants. “Small businesses need as much access and the same benefits of movement as any other business,” he said.

“What we are telling them is that EZDubai can provide them the platform to get whatever they make to market in the fastest possible way. And that we can take care of all their [backend] tech requirements to make that happen.

“This is not about EZDubai or any government entity competing against them – but about extending a vital support where needed and to whoever needs it.”

If that means getting an outside tech company into the mix, Ahmad is all for it. “If they can show us their solutions can help small businesses, we will be open to any sort of alliance,” he added. “All we need to see is that the company comes up with a bright idea.”

The UAE and Saudi dominate the online buying and selling space in the region, making up a massive 75 per cent of the overall ecommerce volumes. According to a report commissioned by EZDubai in tandem with Euromonitor International and the property consultancy JLL, store-based retailing is expected to grow a CAGR (compound annual growth rate) of 1 per cent over 2019-24 period, while ecommerce is to grow by 19 per cent.

“What’s forecast for ecommerce will drive air freight demand, and EZDubai and Dubai South can offer everything to support any business that wants to deliver by air,” said Ahmad. “The report done with Euromonitor and JLL is a way of keeping track of future growth and what the logistics industry will need to do about it.”

The intention is to bring out the report on a bi-annual basis. “Euromonitor International’s Digital Connectivity Index, measuring a country’s digital landscape over time, reveals that the UAE is outpacing its emerging market counterparts on the index given its well-developed e-commerce infrastructure, coupled with its tech-savvy population,” said Hussein Doughan, General Manager of Euromonitor International in Dubai.

Record it all on blockchain

Dubai is moving towards a customs regime where everything gets recorded on a blockchain.

“A single platform will record all movements for complete transparency,” said Mohsen Ahmad of Logistics District. “It will connect suppliers, buyers, the regulators – in short, everyone. Dubai Customs is driving this project and it’s all part of the new ecommerce strategy that Dubai launched in 2019. Dubai will be right at the centre of all such transformation.”

Ahmad says that even as EZDubai promises connectivity solutions for its clients, it will address another major cost factor – that of leasing space within it. “We offer the most competitive rate in the market – keeping that cost below 10 per cent of a client’s overall costs is manageable,” said Ahmad. “Our clients will need only to focus on their product or service. We have a solution for everything else… or will find one.”