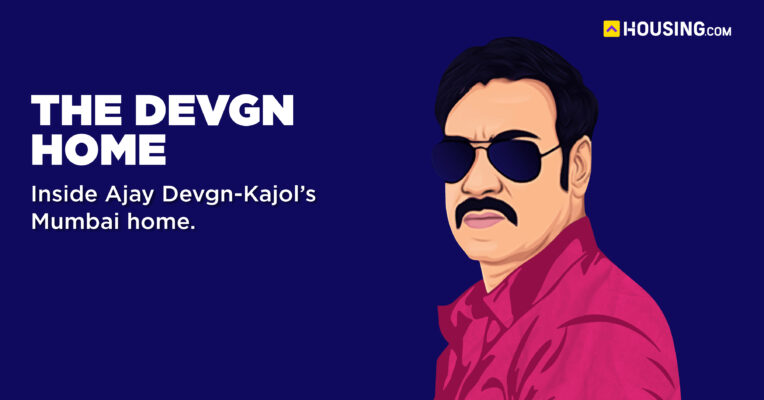 Ajay Devgn and Kajol are certainly one of the most loved celebrity couples in Bollywood. With two kids and numerous movies together, the two have come a long way, when it comes to wealth generation and investments. To start with, the couple owns a sprawling bungalow in Mumbai’s Juhu, one of the city’s posh locations. The locality is home to other celebrities including Hrithik Roshan, Amitabh Bachchan and Akshay Kumar. Take a glimpse inside Ajay and Kajol’s den, which is nothing short of a marvel amid the most expensive celebrity homes in India.

Ajay Devgn and Kajol have named their home ‘Shivshakti’. The house has a very elaborate façade, as compared to other celebrity homes in Juhu. The house has soothing shades of cream and brown, along with majestic staircases and elaborate light fixtures.

The home has a wooden accent, which is quite visible from the couple’s Instagram pictures. The staircase is often used as a backdrop for Kajol’s pre-red carpet photoshoot. Another noticeable element is the long light fixture, which hangs from the ceiling. Apart from this, one can certainly notice the numerous oval-shaped bulbs hanging from the winding staircase, giving the impression of large water droplets.

There is a simple staircase as well, which has a frosted glass as a backdrop. On the first floor, there is a lobby, which has white marble flooring, an elevator and floor-to-ceiling wood paneled glass windows with blinders, to bring in sunlight during the day. This is another backdrop for Kajol’s many photographs.

Beside the lobby, there is a white living room which also has a six-seater dining table, surrounded by snow-white leather chairs, each adorned with a matching cushion. In addition to this, there are tall windows, similar to the ones in the lobby, against which ivory couches are placed. One thing which can be seen predominantly is Devgn and Kajol’s love for floral arrangements.

There is a monochromatic room that adds variety to the rest of the house. It has a deep brown colour palette, which adds a soothing effect to the home. There is another lounge area on the opposite end of the living room, which is in stark contrast to the dining room colours, limited to bright red leather sofas. Some family photographs are kept here, which brings a personalised feel to this corner of home.

According to media reports, Ajay Devgn has bought a sprawling bungalow in Juhu for around Rs 60 crores. The bungalow, spread across 590 sq yards, is close to the actor’s existing bungalow, Shakti, situated in the Kapole Co-operative Housing Society in Juhu. The deal was finalised in November 2020 but the property transfer was done on May 7, 2021. The bungalow was earlier owned by the late Pushpa Valia. According to market sources, this was a distress sale, as the existing price rate of the bungalow is around Rs 65 crores to Rs 70 crores but due to the pandemic, Devgn may have bought it at a discounted rate.

Apart from the Juhu property, Devgn also owns a lavish bungalow in London’s Park Lane, where Shah Rukh Khan also has a property. The bungalow is worth Rs 54 crores. Devgn also owns a private jet. He was the first movie star to buy an aircraft worth Rs 84 crores. Apart from this, he was also the first Bollywood actor to own a Maserati Quattroporte, which he bought in 2008.

Where is Ajay Devgn’s home located?

Ajay Devgn has his own sprawling bungalow in Juhu, one of the poshest areas in Mumbai.

Which car does Ajay Devgn have?

Ajay Devgn owns a Maserati, a Rolls Royce Cullinan, a BMW and an Audi Q7.