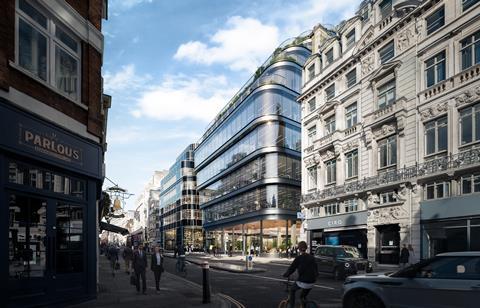 Property Week can reveal that CO—RE plans to renovate the art deco Daily Express Building and replace the adjoining River Court, which Goldman Sachs vacated in 2019, with a 21-floor asset comprising more than 540,000 sq ft of offices and 18,000 sq ft of retail space.

Located at 120 Fleet Street, the redevelopment will involve the separation of the Daily Express Building from River Court through the creation of a publicly accessible open arcade.

Designed by BIG, the proposals involve a stepped design with external terraces at the new site where River Court, which was developed in the late 1990s, currently sits.

River Court has been vacant since Goldman Sachs left the building in 2019 to move to its new HQ, Plumtree Court, on Farringdon Street.

A public consultation has been launched on the proposals today. CO—RE aims to submit for planning later in spring 2021 with a view to construction starting in Q1 2022.

The Grade II listed Daily Express Building’s foyer, currently hidden from public view, will be revealed and visible from Fleet Street. The front of the building will be opened-up to showcase local cultural offerings on a rotating basis. At roof level, a pocket park will be free to access to the public.

David Hutton, director at CO—RE, said: “120 Fleet Street will raise the bar for the future of offices. New office buildings will need to cater for occupiers that demand sustainability, health and wellbeing and future flexibility to be at the centre of their design. 120 Fleet Street has been skilfully designed to minimise its environmental impact whilst maximising access to outside space and fresh air, it puts cycling front of house for occupants and visitors and opens up new public realm and retail embedding itself into the Fleet Street neighbourhood.

Andy Young, technical director at BIG, said: “Our design proposal has been driven by the local context in terms of the physical scale and character of surrounding buildings in The City of London; but also by the social context of the future workplace with a focus on wellbeing, health, and sustainability. We hope to deliver a building of great elegance and relevance to its location that provides a new and improved setting for the Daily Express Building on Fleet Street.”