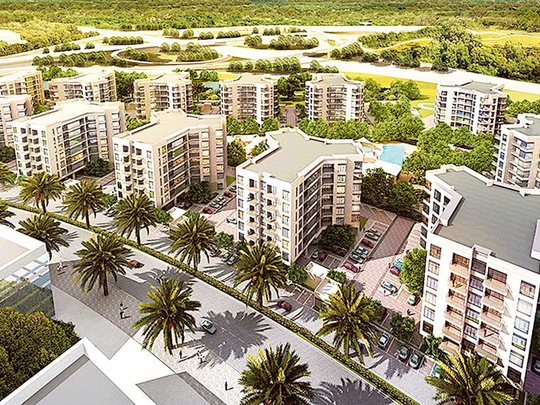 Dubai: The crowdfunding movement is gaining visibility in Dubai’s property market – one such platform, SmartCrowd, has struck an agreement with MAG Property Development to pool such investments into the developer’s projects.

This is one of the first such alliances between a crowdfunding platform and a leading local developer. What crowdfunding does is allow multiple investors to pick up small stakes in a property – or properties – rather than buy individual units on their own. Also, the upfront investments to buy a stake is in the thousands of dirhams rather than in the hundreds of thousands.

Mag 5 Dubai South is a “few kilometres” from the Expo 2020 site. The residential community features 13 buildings.

“SmartCrowd opens the door for a new wave of investors who want to be part of the success story of Dubai,” said Talal Al Gaddah, CEO of MAG Property Development.

“With MAG 5 Dubai South, investors will be able to own an affordable share of real estate from just Dh5,000 in one of the most up-and-coming new destinations in Dubai,” said Siddiq Farid, CEO and co-founder of SmartCrowd.

On Tuesday, another Dubai-based propertytech platform Stake raised $4 million in a seed funding round. The funding was led by Combined Growth Real Estate, a company led by Amer Hammour, who is Chairman of Madison Marquette, a US-based real estate investment management company with $6 billion of assets under management.

Launched in December last, Stake allows users to pick from pre-vetted selections of properties and invest from upwards of Dh2,000. Stake’s focus is on “prime locations where the rental demand is high and the long-term fundamentals will be a strong driver of capital appreciation”.

In a statement, Manar Mahmassani, co-founder of Stake, said: “When we launched Stake, we made clear our goal to democratise real estate investment and remedy to ills of Dubai’s property market, which prevented the young from participating and delivered unattractive returns for experienced investors.”

Since the December launch, Stake has attracted more than 4,000 registered users and achieving 30 per cent month-on-month increase in sales.